Hey there. I’m Mac. Now don’t none a y’all get yerselves all excited or nuthin, I just been tasked by Corwin’s agent (some four-eyed jackass named Mr. Ledbetter) with sharin what’s goin on with ol Corwin.

See, the sumbitch up and ran off. Last time I seen him, he wasn’t lookin so hot. it was a lil over a week ago when he come knockin on the door of my Airstream. When I answered, I could see he hadn’t been doin good, cuz his hair was all over the damn place and his neck beard had grown like a patch of weeds or somethin, just hair all over the damn place. And his eyes. See, I know Corwin’s not all there in his head, but he just looked crazed. Not even the meth heads out in Chino Valley look that nuts.

I gotta admit I didn’t want none of it at first. I took one look and I told that bum to fuck right off. I slammed the door in his hobo-lookin face and grabbed me a beer out of the cooler. But Corwin just pounded the door harder. He was yellin, too. Now, ya know, I watched me some wrasslin in my day but I ain’t all intellectual about it. I know me some Arn and Ole Anderson, I know me some Buddy Rogers, I know me some Harley Race, but that’s about it. Every once in a while Joey down the street has me over to his momma’s trailer in Cornville for the big pay-per-view, but shit, that’s about it. Corwin on the other hand, he damn well lives for the weird shit. He knows the name of wrasslers I didn’t even know existed.

And that night when he was poundin on my door, he was rantin and ravin about Steiners and Genetic Freaks and Dirty Dutch people and El-Gee-Gan-Tays. Fucked if I know what hell was goin on in his head. I finally opened the door again and there he was, just sittin on my steps, the pockets of his cut-offs stuffed with plastic WCW wrappers. He stunk of pipe tobacco and bathtub gin. He was forlorn.

So I asked him what the hell was up. He said he just couldn’t take anymore of them there cards he was writin about on his blog, and some shit about him tryin a be a “real writer” and write books and respectable shit and really I wasn’t paying a whole lotta attention no more cuz i noticed it was almost time for So You Think You Can Dance and I never miss that shit and now here was this highly educated in-tuh-lectual type cryin on my linoleum floor about figure four leglocks and Boston crabs and I can’t even make heads or tails because I’m allergic to seafood anyway.

So I smack the moron upside the head and tell him to man the fuck up and he wipes his nose on the sleeve of his lil wussy-ass Quantum Leap tee shirt and stands up and says I’m right. And I’m like, “well shit, Corwin, I know that.”

And then he straightens himself out and takes a beer out of the cooler and takes a big, cold drink of that beer and he asks what I’m up to and I tells him So You Think You Can Dance is comin on and I ain’t gonna miss that shit for what and he says cool and everything seems alright. I sit in my lay-z-boy with a pile of cold ones on the floor next to me and he leans against my shelf of Hustlers and we watch the show. And then he goes into the bathroom to take a leak. When the show’s over I notice he’s still in there and I tell him to hurry up and pinch that shit off. And then a whole ruckus kicks up in there and by the time I kick down the door he’s halfway out the bathroom window with his shirt peeled off and his face covered in my old lady’s lipstick like some kind of indian war paint and he says “Load the spaceship with the rocket fuel” and then he’s gone in the darkness. Next I hear the crash of glass and when I finally get my tired ass out the front door he’s peelin off in my old Maverick. Thats when I notice he stole my keys and then I’m just pissed off cuz my Basha’s card is on that keychain and now how am I supposed to get my member savings?

It’s bullshit, I tell you. I hate payin full price for my vegetables. The Maverick is kind of a prized possession as well, but only cuz I won it off Pete Slater in a game of quarters. We ain’t got a whole lot to do in the middle of December round here unless you like skiin. I hate the shit. Don’t ask me why I live in a mountain town that gets snow.

And that’s the last I seen of Corwin. I talked to his agent and he says Corwin just needs some time off to recuperate after all the hard work he was puttin in at the college and he and his buxom lil lady are just gettin some R&R. But I know that’s bullshit too.

The man’s lost his mind. I looked over at his tweeter account or whatever it is and he’s still talkin on it. Looks like he hit Tucson, which baffles me cuz nobody but crazies even wanna step foot in Tucson. But his agent says Corwin is back in town again, so I been tasked with tracking the little fucker down. I got a hot tip from one of the hoboes that hangs around Corwin’s neighborhood, so I’m gonna follow that up.

I’ll let you know. Until Corwin gets back, his agent has left me with his blog password and I’m gonna keep you up to date on my hunt.

Scratch that. Monday was a holiday, so I didn’t open any packs. Hey, even a bum like me needs a day off.

But it took me awhile yesterday and today to get to the usual 2PaD action, for a number of reasons, not the least of which was the arrival of the newest issue of the best wrestling fanzine around, The Atomic Elbow. 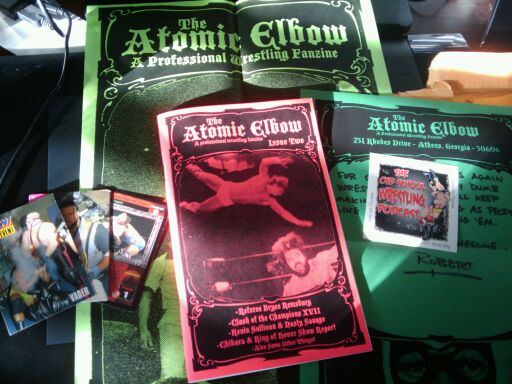 Robert, the gentleman behind the zine, always packs each envelope with more than your money’s worth of stuff. Seen here is the zine itself, along with a poster, a handwritten note from Robert, a sticker for “The Old School Wrestling Podcast” (which I have never listened to but will certainly check out now), and three trading cards (in addition to the “limited edition” pin inserted in the middle of the zine).

Why does any of this matter to you? Well, a couple of things come to mind:

So there you go. Now what?

Now, let’s look at the cards he sent me this time! There’s only three of them, but they’re not from the WCW series I’ve been covering. That’s right, we have new challengers!

What better example of the struggle of working as a professional wrestler, trying to make ends meet with his meager pay and mounting health care costs, than one who has to pull double duty as a garbage man?

The WWF was weird in the 1990s. Before Stone Cold Steve Austin started drinking beer and throwing middle fingers all over the place, the Fed was populated by a lot of dudes who apparently had to have secondary careers in addition to being wrestlers. You had Sparky Plugg, the wrestler who supposedly also drove stock cars; you had The Mountie, who was a Canadian Mounted Police officer that somehow was allowed to make extra cash beating up other dudes in the ring; you even had the Repo Man, who seemed to just be a plain ol’ kleptomaniac rather than a professional repossessor. It was like everybody that wasn’t already a big name had to have a gimmick beyond just being an awesome grappler or technician, and that gimmick had to be some shitty job.
That’s how you end up with a guy like Duke the Dumpster. Duke is a garbage man. He has the uniform and everything, and here he is pictured with garbage. Of course, I am confused about his name. Is he also a human garbage can? Does he consume garbage? I don’t know!

As you can guess, Duke the Dumpster was a huge success, and eventually became World Wrestling Federation Champion. Kids just couldn’t get enough of their favorite trash-collecting superstar, and he went on to bigger and better things, like films, multi-platinum albums and a mansion filled with fake-breasted bimbos who he pays $100/hr to wrestle in his living room.

No, wait, he’s a training a conditioning coach for a high school football team now. Well, at least that’s probably better for his health. 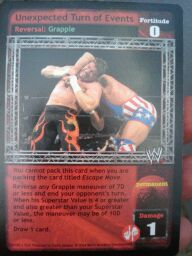 One of these guys is dead. The other now works for TNA, which is almost the same thing.

“Unexpected Turn of Events” might be the best way to describe getting a card with the late, great Eddie Guerrero on it.

If you’re unfamiliar with Eddie, check out some of his matches on youtube. Fantastic work.

This card is a from an ill-fated attempt by the WWE to cash in on collectible card games. How could such a thing not do well? I mean, what better way to partake in your favorite sports entertainment than by recreating it at your local comic shop, where you lose horribly to a 9 year old who calls you gay slurs while sipping his 2-liter bottle of Mountain Dew—

Wait, that sounds remarkably like playing WWE ’12 on XBox Live, except it’s in the form of a card game. Even better.

Eddie, your epic matches with Kurt Angle deserve better than this.

I give you… Big Van Vader. I wish there were Vader cards in the set I’ve been posting. The guy is ridiculous. You can’t understand half the shit that comes out of his mouth, he usually works stiff (which means he doesn’t give a shit if he actually hurts anybody when he’s wrestling them), he wears a g-string on his face, AND he was part of a stable in New Japan Pro Wrestling that was managed by Takeshi “Beat Takeshi” Kitano (you know, the comedian, TV personality, filmmaker and creator of Takeshi’s Castle). The guy is a monster and he’s crazy. There’s just so much to work with when you have devoted your days to writing cheap, lousy jokes about wrestlers.

But honestly, let’s just look at the time he assaulted a TV host in Kuwait when asked if wrestling is fake. (That host later sued the WWF and Vader for the incident)

I honestly don’t know what Vader is doing on this card. I know what it looks like. It looks like he’s so crazy and unpredictable that smoke is actually coming out of his crotch and suffocating his opponent. But that’s the easy joke! 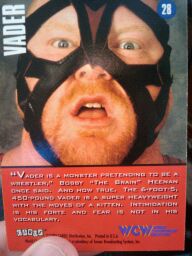 I’m not sure if he’s showing us his “OH” face or if he’s saying something rude about my mother. Knowing Vader, it could be both.

You know what? Fuck it, I’m going with the easy joke.

There was an error retrieving images from Instagram. An attempt will be remade in a few minutes.