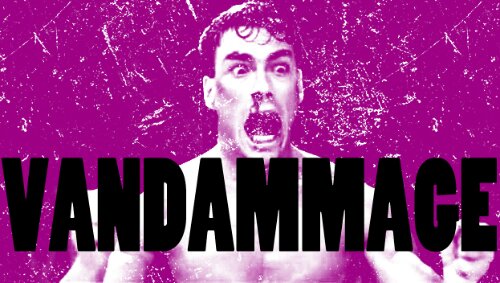 [The following is the first in a series of writings about the filmography of Jean Claude Van Damme. This block of intro text does not count as part of the aforementioned 795 words about Sudden Death, in case you were wondering.]

For my first written foray into Van Dammage , I’ve inexplicably chosen a Van Damme movie that isn’t my favorite. I surprise even myself by not going with Street Fighter: The Movie or TimeCop or Bloodsport. But here we are, looking at a movie about Van Damme fighting terrorist dudes at a hockey game.

Sudden Death is not the best Van Damme movie by any means, and as far as Die Hard movies go, it’s not as good as any of the first three Die Hards, but it is certainly one of many Die Hard knockoffs that I still enjoy far more than latter-day films that bear the actual Die Hard title (another good Die Hard knockoff being Cliffhanger).

Some people like to point to Seagal’s Under Siege as a good Die Hard clone, but Under Siege suffers the major problem that the hero isn’t actually an everyman. Instead, he’s a superman disguised as an everyman, thus ruining the Die Hard Formula.

Aside from all of this talk of Die Hard movies, Sudden Death has a lot of really awful things going on in it, but they’re awful things that I love. I love that for some reason we managed to elect a vice president who likes hockey. I love that terrorists actually think anybody cares if they take the vice president hostage (I mean, I love Joe Biden because he’s the coolest VP in history, but if he got kidnapped, The Daily Show‘s jokes would write themselves for weeks). I love that the head secret service dude inexplicably and illogically turns out to work for the bad guys partway through the movie (it really doesn’t make any sense on any conceivable level). I love that Powers Boothe is in it, because Powers Boothe is awesome in everything, and he’s especially awesome in this (better than the fan favorite Tommy Lee Jones in Under Siege, and you’re reading the words of a man who loves him some Tommy Lee Jones).

Sadly, here’s the real problem with the movie as a JCVD vehicle: while it sticks to the hero being an everyman, it does so at the cost of kicks.

This is important, because the true quality of a Van Damme flick can be mathematically calculated by the number of awesome kicks the Muscles from Brussels delivers. TimeCop knows this. Even Street Fighter knows this. But Sudden Death doesn’t know this, and the film suffers on the Van Dammage Scale of Kickitude.

Van Damme isn’t very good as an everyman anyway, because he lives and dies by how well we buy him as the superkick superman. When you take away his kicks, what are you left with?

Now, let me be clear that I never went into this expecting Hard Target-level Kickitude. Hard Target set the bar for Van Damme kicks so high that all Van Damme vehicles to follow were destined to lose.

But Van Damme spends more time punching dudes and disarming bombs than he does kicking anybody, and the number one draw of Jean Claude Van Damme? EPIC KICKS THAT WILL KNOCK YOU INTO THE FUTURE (this was the original premise of the first draft of TimeCop‘s script, BTW, and I’m totally not making that up; it’s a fact).

Peter Hyams (yes, THAT Peter Hyams, who really fell so far after 2010 and Outland, movies that I genuinely enjoy on their own merits) attempts to make up for this kick deficit by giving us a few Jackie Chan-esque moments where Jean Claude uses random items to beat the shit out of dudes, including two (TWO) instances where he cooks bad guys’ body parts in the arena kitchen. Hockey sticks and ice skates also become weapons, naturally (in one of the few moments where he actually does kick somebody). As Joe Bob Briggs would put it, you got hockey stick fu, hole punch fu, deep fat fryer fu, griddle fu, ice skate fu, pen fu, water gun fu…